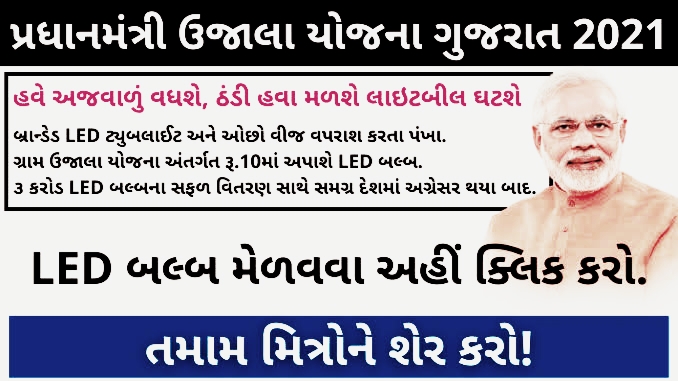 Pradhan Mantri UJALA Yojana Gujarat : Gujarat Government has launched the Ujala Gujarat Yojana for distribution of energy saving LED bulbs across the state. The Ujala Gujarat Yojana has been launched under the central government’s Ujala Yojana scheme at a function in Vadodara. In this article, we will tell you about the new prices of LED bulbs, tube lights and energy efficient fans, eligibility, list of documents and complete details of the Ujala Gujarat Yojana.
Pradhan Mantri UJALA Yojana Gujarat
Gujarat CM Vijay Rupani Decided To Reduce The Price Of LED Bulb Following Overwhelming Response By People Under Pradhan Mantri UJALA Yojana Gujarat. As Per His Decision, The Bulb Will Be Sold With Price Of Rs. 65 Per Bulb For Cash And Rs. 70 Per Bulb For EMI Along With Keeping Similar Rate For Both Residential And Commercial Consumers Of The State.
Chief Minister Shri Rupani Has Also Decided To Initiate Selling Of LED Tube-Light And 5 Star Rated Energy-Efficient Fans Under Domestic Efficient Lighting Programme Launched By The Union Government. As Per His Decision, 20 Watt LED Tubelights Will Be Given To Consumers With A Cost Of Rs. 210 By Cash With A Total Reduction Of Rs. 20 In Its Price Assigned By The Union Government.
The Five-Star Rated Energy Efficient Fan Will Be Sold At Rs. 1,110 Price With A Total Reduction Rs. 40 In Its Price Assigned By The Union Government For The Whole Nation. The EMI Cost Of LED Tube-Light And Fan Will Be Rs. 230 And Rs. 1260 Respectively. 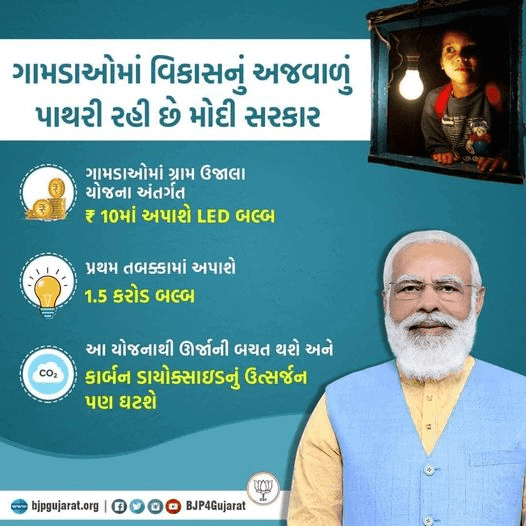 About defective or blown LED bulbs: Pradhan Mantri UJALA Yojana Gujarat
LED bulbs that last for four to five hours every day have a lifespan of more than 15 years and are unlikely to blow up. However, if the bulb blows out less than three years after purchase, the EESL The bulbs can be replaced free of cost, the details of which will be announced after the distribution of the bulbs is completed.
Defective LED bulbs can be replaced at any of the outlets in the city while the bulbs are on sale. The light bulb purchased from any of the two centers will be replaced by any other center.