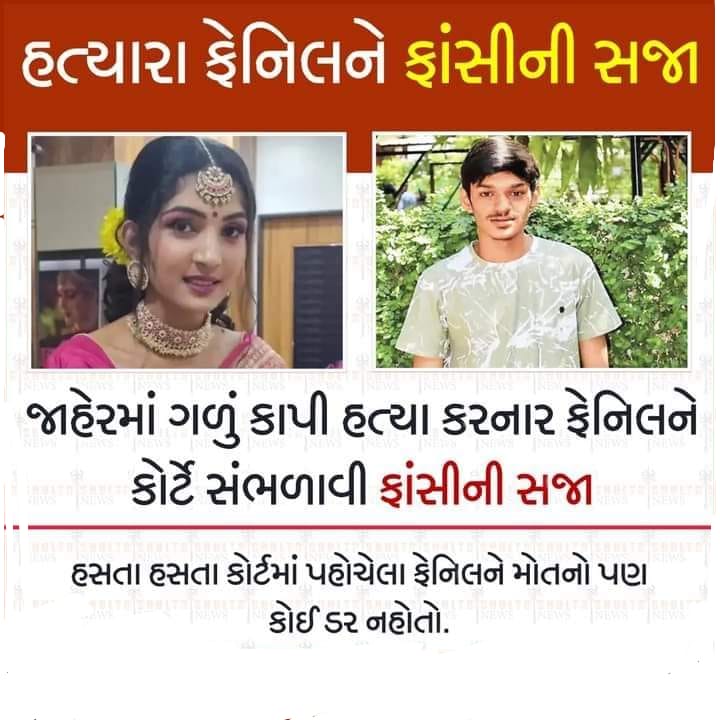 Fenil Goyani, who killed Grishma Vekaria in Pasodra of Kamarej in Surat, has been sentenced to death by a court. “Our police team did not sleep for three to four nights,” said Range IG Rajkumar Pandian, who has been investigating the case from day one. About 50 officers joined the investigation. A chargesheet of more than 2500 pages was presented. Evidence including 190 witnesses, 27 eyewitnesses, 25 commissions, evidence from Fenil’s mobile, audio-clip of FSL report etc. were collected. Fennell also searched the website to buy an AK-47 rifle before killing Grishma. Presented evidence including that. Within days of the count, police presented evidence, including a chargesheet, in court.

Fenil was planning to assassinate Grishma

Fenil Goyani had planned to kill Grishma, which was also revealed in the police investigation. He searched the Internet for information on how to kill, how to find weapons online, and how to use them. He also spoke on the phone to a friend before killing Grishma, an audio-clip police found.

The police presented well-prepared evidence before the court.

The police presented well-prepared evidence before the court.
Police have strong evidence of fennel
Based on the audio clip, the police took Fenil to Gandhinagar FSL during remand, where his voice recording was tested, the report of which was also handed over to the FSLA police. A chargesheet was filed in court after police gathered hard evidence against Fenil. This was the first case of Surat district police to file a chargesheet in a short time. What was the incident?

Fenil Goyani, a madman in a one-sided love affair with Grishma Vekaria, was brutally murdered on February 12 in Pasodra, Kamarej, Surat. He then tried to commit suicide by cutting a vein in his arm and pretending to take a poisonous drug. Fenil, accused of killing Grishma, was released from the hospital by the police and remanded in court. A chargesheet was later filed. The court sentenced the accused to death on the basis of police evidence